Co-Production is an equal relationship between service users and service providers. It is a values-driven approach of working together with planning and sharing decision-making, about the best way to deliver a service.

The NAPPI uk Co-Production training team represented the company by presenting to the BILD Association of Certificated Training (ACT) to become one of the first companies to achieve the status as being Certificated to deliver training to meet the Restraint Reduction Network Training Standards. NAPPI employee Tony Hart is recognised as being the first Expert by Experience to present to the BILD ACT panel.

“this was an excellent presentation and in fact NAPPI could be considered as an exemplar of the process and principles of Co-Production”.

The term Co-Production was first coined in the 1970s by an economist Elinor Ostrom, who used the phrase to explain how crime rates in America reduced when the police were walking the beat, instead of patrolling the streets by car.

When they walked on the streets the police developed relationships with the local community and exchanged informal knowledge that was critical in preventing and solving crimes. The police needed the communities, just as much as communities needed the police. 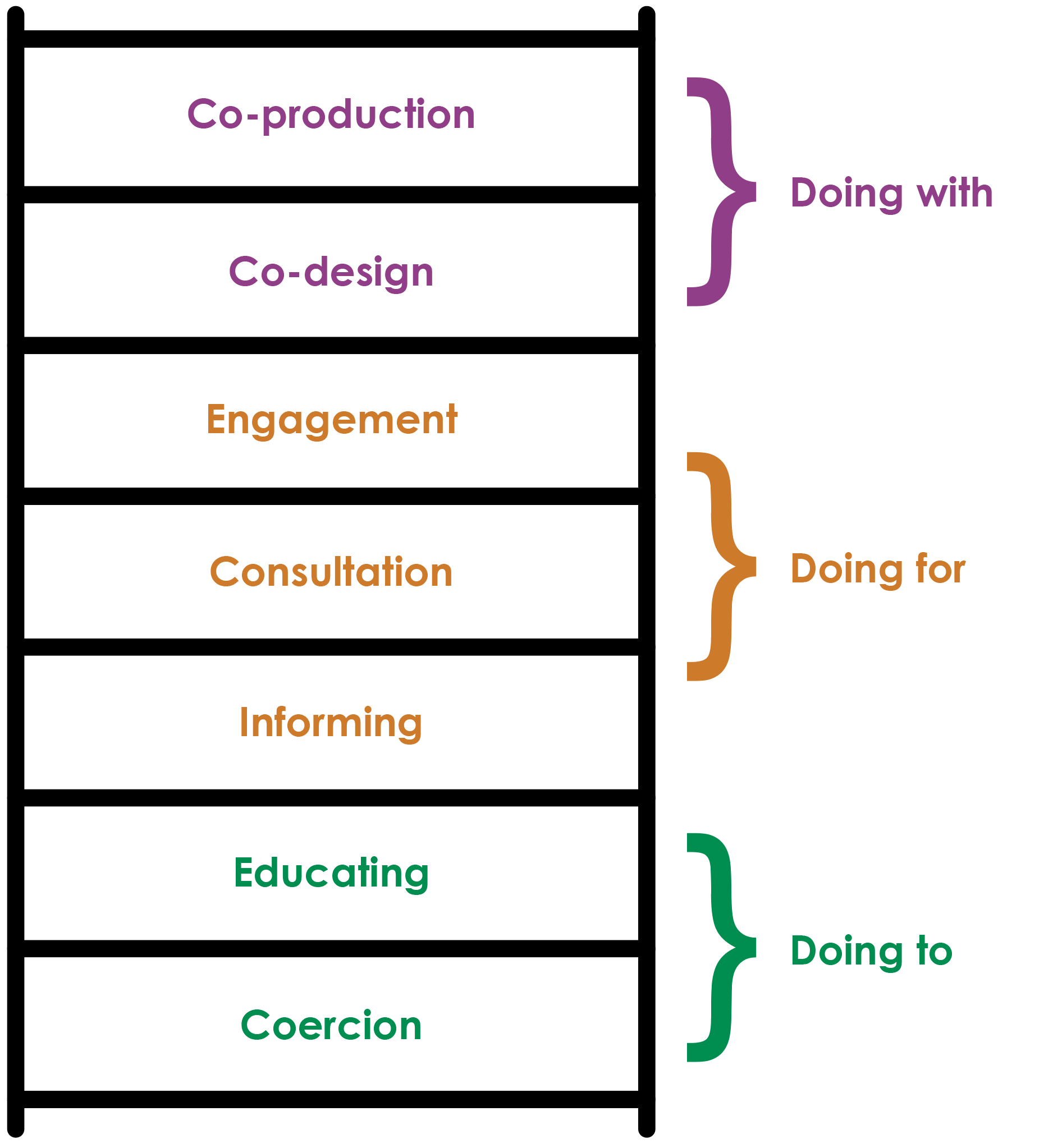 The Co-Production Ladder has been adapted from Arnstein’s Ladder of Participation (1969). It helps to separate things that are tokenistic, from the real examples of sharing power.  In these examples, the ladder is used to consider the level of engagement that a service user has within the process of interviewing a potential new employee to work at a care home.

The individual is in an equal relationship with the people responsible for services. They work together, from design to delivery, share decision-making and decisions about the best way to deliver services. For example, being involved in the interview process, including planning how the interview will run, writing their own questions, knowing that their decision carries equal weight and will be informed of the outcome.

The individual is given more opportunity to express their opinions, but they are not involved in the design or delivery. For example, they are asked what qualities a person should have for a job that is to be advertised and these suggestions are included into a job advertisement.

The individual is asked for their opinion, but these are not really taken into consideration.  For example, they are asked what qualities a person should have to work in a care home.

Information is given, but it is all one-way without any chance to negotiate. For example, they are told that there is an interview today for a job at the care home. They are told to meet the person at the door and talk to them so the manager can observe how the person engages with them.

The individual is told about design or delivery, but that is all. For example, a service user is told that they should come and sit in the office at 2.00pm where the manager will be asking someone questions to see if they would be a good support worker for a job at the care home.

The individual is not involved in the design or delivery but is forced to participate. For example, a service user is told to come and sit in the office when the manager is interviewing someone for a job at the care home.

In some ways the ladder is not the best analogy as it suggests that to succeed you should reach the top. However, many situations require experts to make the final decision and delivery.  We cannot all be the CEO, but that does not mean that we do not contribute to the success of the organisation.

Many individuals will be involved in the early stage of a project, including experts-by-experience, without seeing the project to completion. The important thing is to ensure that any activities offer meaningful engagement and Co-Production is recognised at every stage, rather than labelling the whole project as being co-produced.  It is very easy to get Co-Production wrong, and difficult to get it right, but that should not put us off getting started.